The Stuart Mesa playground facility is also equipped with a 2-5 age-group playground, consisting of several slides, a clatter bridge, a number of play panels, a six position arch swing set and a tire swing structure. Upon completion of the installation, engineered wood fibers were blown in to provide a safe playground surface underneath the equipment. Aside from being economical, easy to maintain and readily available, when compacted properly, engineered wood fibers satisfy all ADA accessibility requirements.

Other recent projects completed at Camp Pendleton include the installation of a fitness trail course at San Luis Rey housing, consisting of overhead ladders, vertical ladders, chin-up bars, pull-up bars, balance beams, step-up stations, body curl bench, etc. This equipment was installed over engineered wood fibers as well, in order to protect children and adults from accidental falls. Pacific Play Systems designs its fitness trail equipment based on the level of physical challenge desired, while still maintaining a high degree of play value and age-appropriateness throughout its projects in order to entice children’s participation in a safe and challenging play environment.

Wanting to do more to encourage adult participation in the fitness and play environment, in 2011, the company introduced its Exercraft line of fitness equipment, manufactured by Kraus Craft, Inc., designed mostly for adults, but also suitable for children 13 and over with adult supervision. This equipment can be used for either indoor or outdoor applications and can be installed over hard surfaces such as asphalt or concrete. Generally speaking, a typical Exercraft fitness tower is capable of having a maximum of three fitness components attached to it. 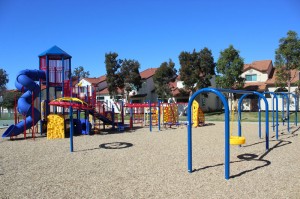 Recent studies have shown that age-appropriate playground equipment as well as fitness equipment can go a long way in improving physical fitness, while having a soothing effect, replacing nervous energy and improving the general health and morale of children and adults. By adding one or two Exercraft fitness towers in close proximity of each playground site, Pacific Play Systems is hoping to create more opportunity for adults to get some much needed exercise, while supervising their children at play.